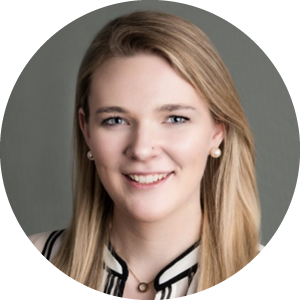 As an Analyst, Ashley Aylward utilizes her background in political organizing and survey methodology to develop research that gets to the root of the motivating factors for hard-to-reach populations.

She is currently working on her Master’s in Data Analytics and Policy with a concentration in political behavior at Johns Hopkins University. Prior to joining the HIT team, she worked with a multiple political campaigns in the Greater Chicago Area to successfully flip congressional, state, and county level seats from red to blue while working for the JB Pritzker for Governor Campaign. Ashley served as a Research Specialist at the University of Chicago Survey Lab prior to joining HIT.

Ashley first got her start in public opinion polling by researching perceptions of trust and women’s representation in the Maryland State Legislature, which is what led her to work at the Goucher Poll for the majority of her undergraduate career. While at Goucher, Ashley worked to increase youth voter turnout and engagement by organizing young voter forums on campus. In 2018, she received the Sarah T. Hughes Award for Practical Politics from Goucher College and the Democrat of the Year Award from the Maryland College Democrats for both her work in polling and political organizing.