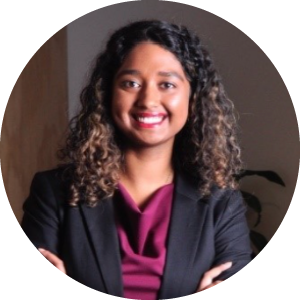 As Communications Coordinator, Tanvi coordinates the digital and media communications for the HIT team and partners, focusing on elevating storylines surrounding underrepresented communities, specifically young people, racial and ethnic minorities and women. Tanvi has been working with HIT since March 2020, previously serving as a research fellow and then the Communications Director during the 2020 cycle when she helped start the Communications Department.

Prior to joining the HIT team, Tanvi worked as an organizer in the gun violence prevention sphere with Giffords and March for Our Lives to mobilize students to lobby elected officials for policy action. During her time as a lobbying coordinator, Tanvi realized that life-saving policies couldn’t be passed unless there were elected officials courageous enough to support them. Thus, her work at HIT Strategies lies with understanding motivations of the emerging electorate – young people and minorities – in order to increase turnout for inclusive, forward-thinking candidates. Tanvi is a recent graduate of The George Washington University where she studied Political Science and Sociology.