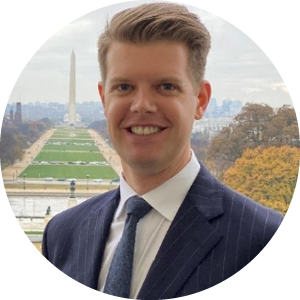 David joined HIT Strategies in early 2021 after a decade of experience in survey research, strategic guidance, and advising candidate campaigns and advocacy organizations. He comes to HIT Strategies after serving as the Director of Polling and Modeling at the Democratic Congressional Campaign Committee (DCCC), successfully defending the Democratic majority.

Before his tenure leading polling at DCCC, David worked as a Research Analyst at Tulchin, providing project management and strategic analysis to clients as varied as Defenders of Wildlife, the ACLU, the Southern Poverty Law Center, Prop 62 (Repeal the Death Penalty Initiative), Bernie Sanders for President, Gil Cisneros for Congress, the DCCC independent expenditure (I.E.).  and state Democratic legislative caucus polling in Montana, Michigan, Illinois, and California. While at Tulchin Research, David developed the most sustained training in research methodology among diverse audiences and multi-modal survey interview techniques.

David began his survey and qualitative research training at the Feldman Group after graduating college in 2011. During the 2012 cycle, he worked on the polling team handling strategic research for the Obama for America in Ohio, Tammy Baldwin for Senate, Jay Inslee for Governor, and a successful effort to defeat restrictive voter I.D. laws in Minnesota.

He began his political life by dropping out of college and joining Obama for America in Indiana. Working as an organizer, he helped build the person-to-person voter contact network that turned the Midwest state from red-to-blue for the first time in over 40 years. He then returned and finished his B.A. undergraduate degree in History at the University of California, Santa Barbara (UCSB) while coordinating student organizing for Newsom for California.